Dear friend and novelist Mark Bacon has taken the time to read and review Look At Her! By golly! I’m so happy! Mark writes a wonderful blog about mysteries. It’s no mystery to me that when he wrote his first novel, Death In Nostalgia City, it was a grand success! I read it and loved it! His second novel, Desert Kill Switch, features beloved character Lyle Deming challenged to solve another mystery in Nostalgia City. I can’t wait to read it!

Thank you very much Mark! I appreciate your words! (He’s convinced he’s ‘singularly ill-equipped’ to review poetry. I beg to differ, friend!)

Look at Her is an emotional, loosely structured, punctuationless ride from the depths of a woman’s fears to the highs of sexual pleasure. Do you want to know what a woman thinks, about herself, her gender, her family? Author Vanessa Shields shares what no one shares: self-doubt, sexual fantasies and realities, longings, vulnerabilities, fear.

Her poetry is fiercely realistic and unrestrained especially when she talks about sex, which she does often. Sexuality runs throughout the book, from a prom-night adventure to sex as a birthday gift to oral interpretations. Her viewpoint on sex and a woman’s body ranges from the purely personal to the observations of a bystander, though mostly it comes from inside.

The poems are sensitive and intuitive such as when she talks about childbirth or a family memory. A battle with cancer, yet to be revealed, and daughterhood get a fresh look when the author talks about her mother’s daily routine.

in the mornings of my youth

Divided into four sections, Body, Motherhood, Family, Power, Look at Her covers an array of feelings and subjects. It can be interpreted as a personal reminiscence and an exploration of what it means to be a woman, physically and emotionally. Doubt and internal conflict are themes throughout and Shields can describe the moods and thoughts with a few words, words that linger.

She uses a variety of literary devices. A meditation on motherhood, violence, and the future, is raked up in metaphor of autumn leaves. She makes us laugh when she delves into the double meaning of words when applied to sex or to remonstrations to children.

The other dads were mean or translucent

in the hospital bed while the nurses

complained and the doctors schemed

Your tongue is tied to a language only lust can speak

I write poetry to avoid telling the truth

The last sample notwithstanding, Shields does tell the truth. Hard, touching, revealing, vivid truth. The poems leave you knowing the insides of a women, literally and intellectually.

One thought on “REVIEW NUMBER TWO! From novelist Mark Bacon in Nevada!” 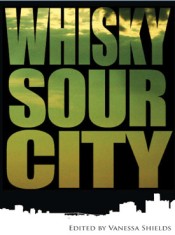